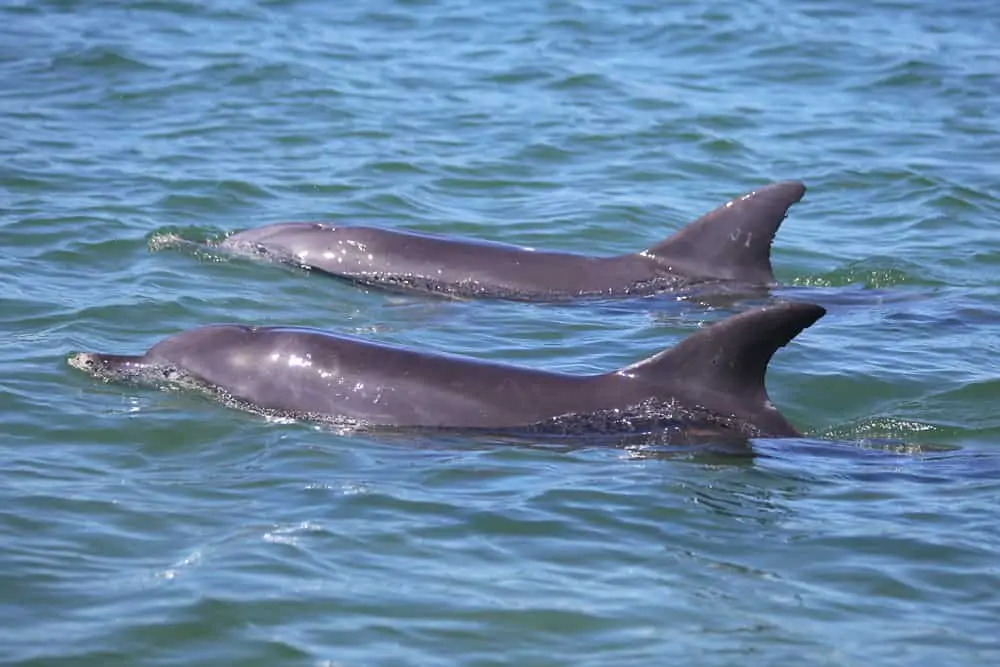 Dolphins are known to be highly social and intelligent animals that display complex behaviours.  It is no surprise that outside of humans the most complex social groups and structures have been found in bottlenose dolphins. Specific research supporting this has been done on a population of dolphins in Shark Bay, Western Australia and similar behaviours have also been observed with our dolphins here in Mandurah.

Male dolphins form strong bonds with other males, this is called an alliance.  The formation of an alliance is regarded as one of the most socially complex male mating strategies in mammals.  Male alliances can be seen side by side synchronously as they travel, rest and socialise together.

It is believed that at an early age the males start to form bonds with each other and this continues as juveniles where they may spend time in larger groups with other males, learning the rules and behaviours from each other.  By the time they reach adulthood and become sexually mature they have formed their alliance with one or two other males.  This may last for many years or even their lifetime.

As an alliance, they co-operate together to control the movement of individual females for periods of time, ranging from minutes up to several weeks.  This is known as herding, with the main purpose being to mate with the female.  Although they co-operate together they still remain in reproductive competition with each other.  It is believed the males chase the female and try to separate her from her group before capturing her.  They closely surround the female, guarding her to prevent other competing males gaining access to her, to improve their chances of fathering the offspring.

Research findings in Shark Bay indicated that each male alliance maintains friendly relations with one or two other alliances in the community.  They have been seen to join forces, forming multiple level alliances to confront rival males.  Studies have also shown that the success of an alliance seems to increase with age as they strengthen their position within the male alliance hierarchy. In Mandurah there are certain male dolphins that are consistently seen together which suggests these may be alliances.  During the mating season you will notice a lot more social activity, with other males coming in from the coastal waters to seek the females and to compete with the resident male alliances. We look forward to finding out more information with the research currently being done by the Mandurah Dolphin Research Project. Some of the males often seen together are:

Above: Zero One and Fourteen © Photo Mandurah Dolphin Rescue Group

You may notice in the above photos several dolphins have numbers on their fins.  Please look out for our next blog, where you can learn more about freeze branding. If you ever see a dolphin stranded or in distress please contact the Wildcare helpline on 08 9474 9055. Please feel free to ask any questions you may have below and we’ll have our expert dolphin team answer them. To book a dolphin tour with us, click here.