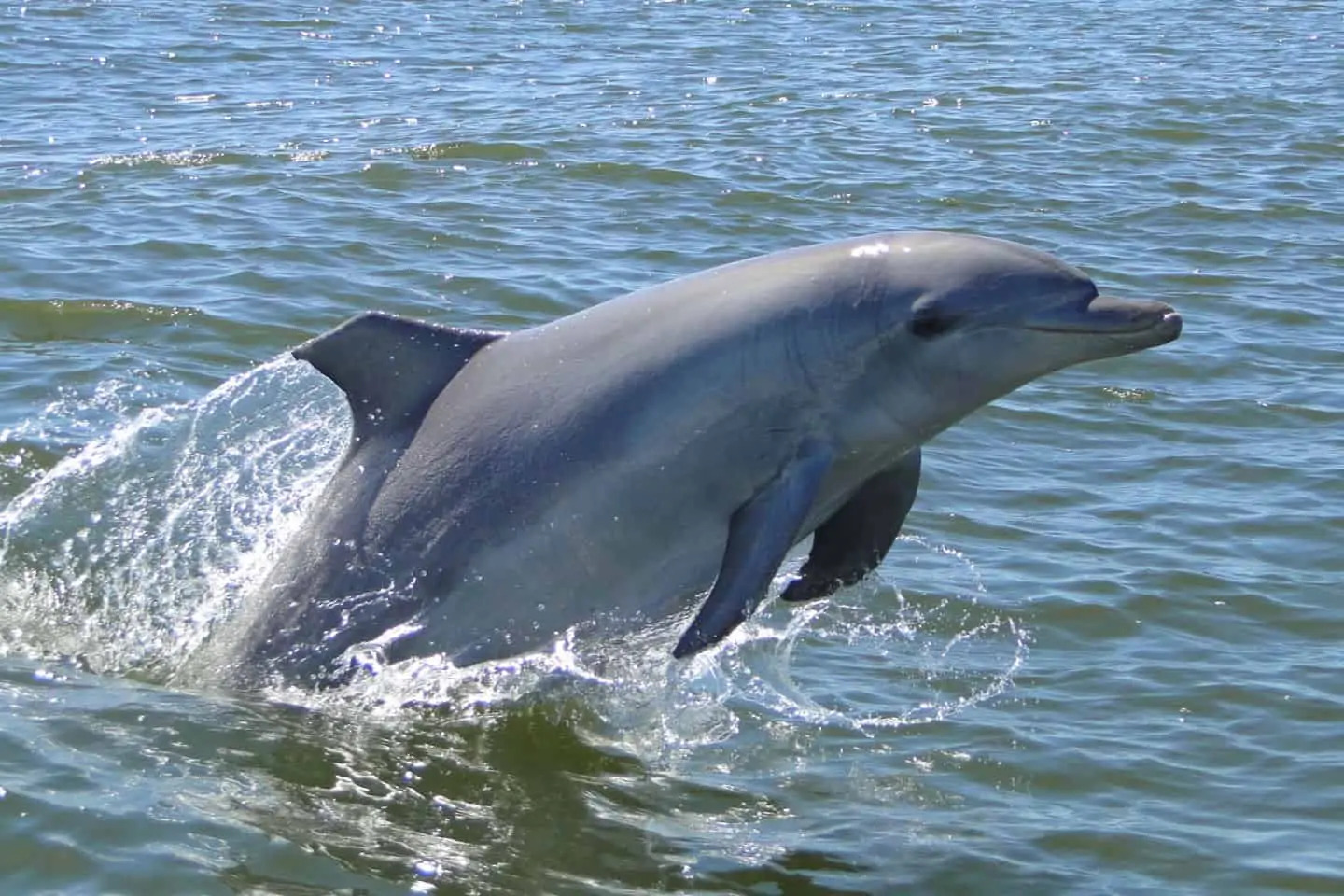 We would like to introduce to you two of Mandurah’s resident dolphins – Nikki and John Edwards.  They are both easily recognisable with their distinct dorsal fins.  From a distance they may look similar with the same shaped fin but if you look closely you can see the difference.  You may have seen them in Mandurah’s waterways but not realised that they are two different dolphins. One spends a lot of time in the town waters and the other is often seen in the Dawesville Cut.  Can you see the difference?

One of Mandurah’s most well known resident dolphins – Nikki, has been seen in Mandurah’s town waterways for many years.  If you are a local in the area there is a good chance you would have seen Nikki on numerous occasions.  We are unsure of her exact age but her first official recorded sighting was in 1997 by the Mandurah Dolphin Rescue Group and at that time she was recorded as an adult with a calf. So, we know she is over 30 years of age. It is believed that Nikki lost the top of her dorsal fin many years ago from fishing line. The fishing line would have wrapped around the top third of her dorsal fin, eventually cutting it off.

Nikki is one of a kind, that’s for sure, capturing the hearts of many who have been lucky enough to see her.  She is considered the matriarch of the dolphins here in Mandurah, especially in town waters where she spends most of her time.  She is not only a wonderful mother who has had many calves but she is also a grandmother and most likely a great grandmother!  Her most recent calves are Christmas (2008), Giggles (2012), Surprise (2015) and her latest calf born this year, Djinda (2018).  Christmas is a mother herself now, with her second calf Spirit also born this year.  Nikki and her adult daughter Christmas are often seen together and this year has been very special to see them with their newborn calves together.

Above: Nikki and her calf Giggles (2012) ©Photo by Natalie Goddard

Nikki is an expert in shallow water feeding, pushing the limits by following the fish into the shallows and at times almost stranding. She uses a very unique technique called the “tail whack” to stun and disorientate the fish which makes it easier to catch them. She has passed this technique on to her calves over the years and now juveniles and adults, they too are often seen tail whacking in the shallows.  If you are lucky enough to witness this, it is pretty spectacular to watch. Below is a video of Nikki using her tail whack technique in front of a crowded beach. This was captured in October 2017 by Darlene of Acton Mandurah.

Recent studies conducted as part of the Mandurah Dolphin Research Project have discovered that Nikki and her family are much larger in size than the average size dolphins here in Mandurah and other indo-pacific bottlenose dolphin populations in WA . They are known as the “family of giants”. The research shows that Nikki’s calves grow faster and larger and mature (reach sexual maturity) at a younger age. Nikki’s calf Christmas (born 2008) had her first calf in 2016 at only 8 years of age where most dolphin don’t reach sexual maturity to ~12. This gene has been passed on to her calves, for example, Christmas’s calf Spirit (born 2018) at 5 months old was already the size of a 1 year old (+160 cm)!

Over the years Nikki continues to navigate her way through the waterways in town despite the increased boat traffic. She is a very confident dolphin that recognises our cruise vessels and loves a surf with us. While most other dolphin mothers shy away from human interaction in the early days of their calf’s arrival, she has always been quick to bring her new family edition over to us and show them off.

Another well known dolphin who has also been around for many years is John Edwards. He is an adult male who spends the majority of his time in the Dawesville Cut and coastal waters.  He is often seen surfing with the local surfers at some of the popular surf breaks nearby. John Edwards has formed a strong bond or alliance with two other adult males, Jack Daniels and Jim Beam. They are regularly seen together, if not then they won’t be too far away from each other. Sometimes they can be seen in the canals near the Dawesville Cut chasing fish along the canal walls.

In 2009, a dolphin was seen with a trail of fishing line and weed caught on and cutting through its dorsal fin.  Department of Environment and Conservation (as it was called then) and the Mandurah Dolphin Rescue group were called in to rescue the dolphin.  After a lengthy rescue they were able to remove the line and weed and the dolphin survived despite losing the top part of his fin.  The wildlife officer that rescued the dolphin is called John Edwards, so it was appropriate to name the dolphin after him.  John Edwards has many other scars as a result of a few close encounters with sharks as you can see in the photo below.

Please ensure you dispose of fishing line responsibly and remove any rubbish you may see littered in the area to prevent it entering our waterways and potentially harming or killing our beautiful dolphins and other amazing wild life.

We would love to hear if you have seen Nikki or John Edwards and any stories you may have about them.  If you ever see a dolphin stranded or in distress please contact the Wildcare helpline on 08 9474 9055.

Please feel free to ask any questions you may have below and we’ll have our expert dolphin team answer them. To book a dolphin tour with us, click here.