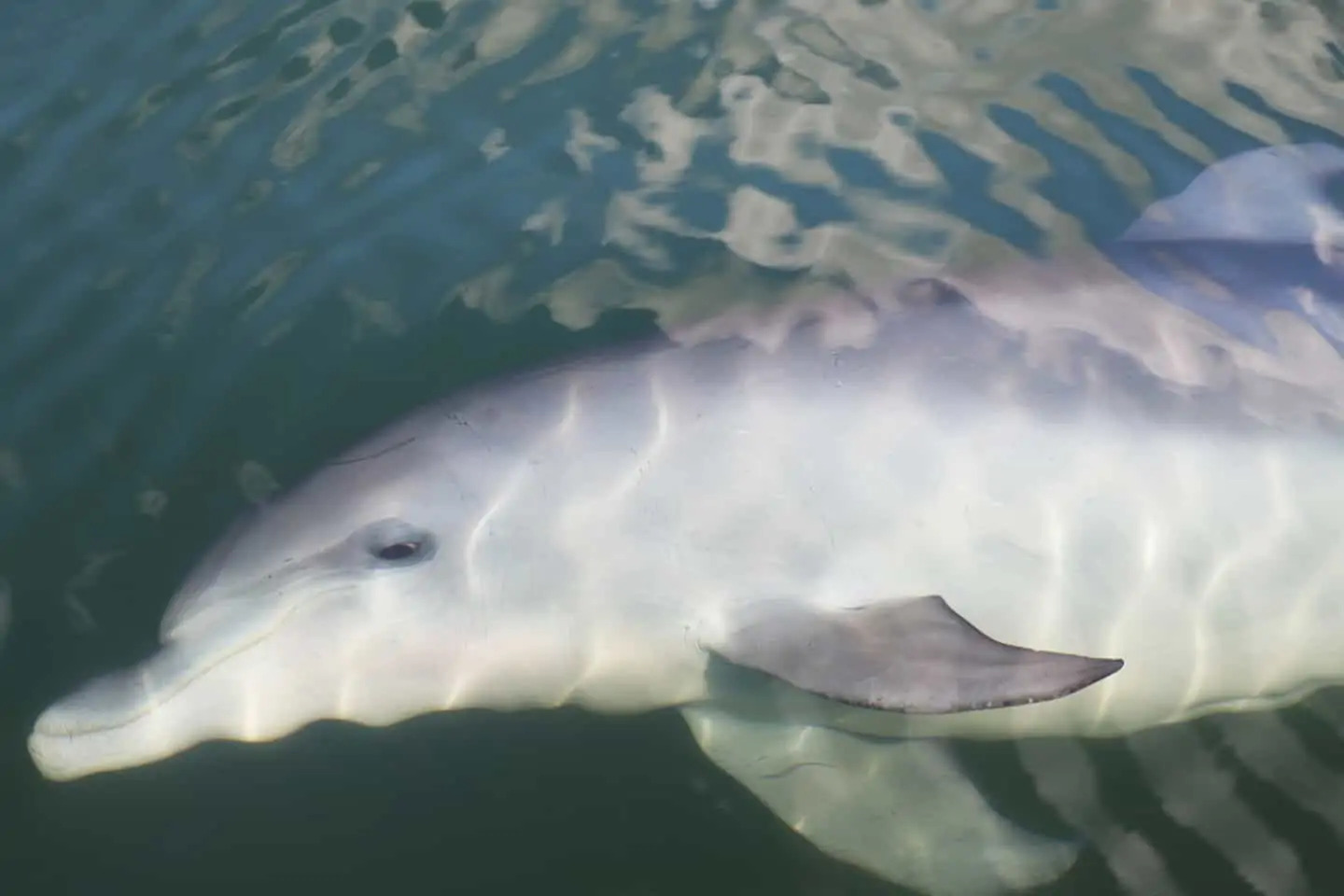 Born in March 2016 to mum Gnawra, Nugget was developing into an active, inquisitive little calf just like other dolphins born that season. The pair spent most of their time in town waters and would frequently join our Dolphin & Scenic Canal Cruises for a surf in our wake.

In November 2016, the Mandurah Volunteer Dolphin Rescue Group started to receive reports about a very small lone calf in the Harvey Estuary. After much searching, months later this little dolphin was sighted alone in the Peel Inlet and identified as Nugget, from markings on her body. The youngster was very small for its age and very skinny, which are signs of malnourishment, as it had been fending for itself.

Dolphin calves are dependent on their mothers for 3 years, suckling their nutrient rich milk for 18 months and learning the dolphin ways of life – like catching fish – from her in that time. Gnawra and Nugget were last seen together on the 31st October – when Nugget was just 8 months old. Gnawra was never seen again and her disappearance remains a mystery.

All the odds of survival were against nugget, as it is unheard of for a calf so young to be able to survive without its mother.

The Mandurah Volunteer Dolphin Rescue Group and Mandurah Dolphin Research Project would regularly search for Nugget to check its wellbeing. For the first year of being orphaned she would always be seen alone or sometimes near other dolphins, but she was never considered to be part of the group.

In May 2017, Nugget was observed to be developing spotting (freckle like) on its head and what’s referred to as a peanut head which indicate poor immunity and health. The spotting became more prominent as the year went on, spreading across her body (see photos below).

It wasn’t until October 2017 that Nugget started to be observed with a group of mothers and their calves and some juveniles in the Harvey Estuary. This was a great sign she had finally been somewhat accepted in the dolphin community.

By February 2018 Nuggets spotting had cleared up and Mandurah Dolphin Research Project were able to get a measurement of the youngster, using their laser technology. At two years of age she measured 158cm, the typical size of a two year old being 179cm.

At the end of 2018 Nugget had really found her place and established strong bonds with other young calves including newly weaned Breeze, another orphan Djinda, and juvenilles including Buddy and Comet.

Since then, aside from a bit of sunburn on the nose (making her easily identifiable), and being smaller than her peers, Nugget is flourishing in the Peel-Harvey Estuary, appearing happy and healthy and consistently seen with her juvenile friends. She has also spent a lot of time the past 6 months playing alongside this seasons newborn dolphins and teaching them her cheeky ways.

The now 4 year old, is a true survivor and Mandurah’s miracle dolphin.

Nugget playing with the newborns May 2020 – © Mandurah Dolphin Research Group

If you ever see a dolphin stranded or in distress please contact the Wildcare helpline on 08 9474 9055. Please feel free to ask any questions you may have below and we’ll have our expert dolphin team answer them. To book a dolphin tour with us, click here.